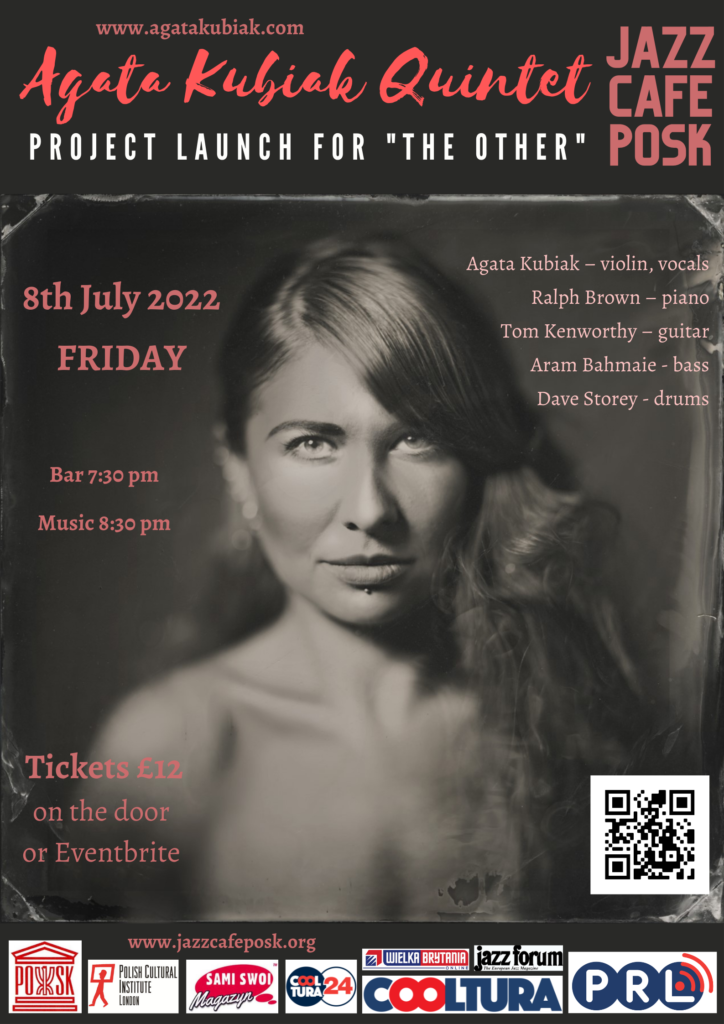 Tickets £12 on the door and Eventbrite

Agata Kubiak Quintet is a new project from acclaimed London-based jazz violinist and singer Agata Kubiak. The Quintet features Ralph Brown on piano, Tom Kenworthy on guitar, Aram Bahmaie on double bass and Dave Storey on drums. They are currently recording a new album featuring original compositions and arrangements by Agata, Tom and Ralph. This new record differs from Agata’s debut release ‘Polarity’ with a higher prevalence of rhythmic energy, riff-based structures and sonic exploration, while maintaining the strong connection with Polish jazz tradition, ECM-inspired sound worlds and intimate, poetic approach to lyrics both in Polish and English. The group is very excited to be able to showcase this brand new material to the Jazz Café POSK’s audience.

”'She sang with an infectious warmth and delicacy and her improvising was special: lyrical melodies hung on to leading and auxiliary notes for just that little bit longer than expected”  (London Jazz News)

Agata Kubiak is a London-based jazz violinist and singer. Originally from Poland, Agata’s playing and music is strongly rooted within the polish jazz tradition. Her violin playing is influenced by a variety of styles, from post-bop, late Coltrane, and Seifert through polish folk to metal and contemporary classical. Agata studied jazz voice with Anita Wardell and Iain McKenzie. She was a finalist of an international jazz competition Riga Jazz Stage 2014 and was also listed in the top 20 female jazz singers by the European Jazz Magazine ‘Jazz Forum’ in 2015. Since her debut album (‘Polarity’) release in 2014 she completed a PhD studying creativity in performer-composer collaborations. Apart from a busy performing and recording career Agata is a published academic author, and currently teaches at the London College of Music.

Ralph Brown is a Doncaster-based jazz pianist and composer. He is very happy to be reunited with the Agata Kubiak 8 years after her debut album release. Ralph has played nationally and internationally since graduating from a Royal Birmingham Conservatoire in 2012. He is grateful to be a student of the late John Taylor, one of his main jazz piano influences. Ralph spent many years pursuing a career as a Music Director around the world. He is now back in UK, based in Yorkshire, engaged with a busy performing and teaching schedule. Ralph also leads and writes for his own group Ralph Brown Quartet.

Tom Kenworthy is a jazz guitarist based in London. He is influenced by both the bebop and free improvisation traditions as well as elements of various folk music, 20th century ‘classical ’music, blues and metal. He was strongly affected by a short period studying with Stuart Hall. Apart from the Agata Kubiak Quintet, he has worked among others with Selectric and the Charlie Pyne Quartet.

Aram Bahmaie is a Bassist from Guildford. Since graduating from Royal Birmingham Conservatoire in 2018 he has performed at venues all across the U.K. Influenced by the rhythms of jazz and the textures found in electronic music, he plays both Double and Electric Bass, enjoying both the traditional and more explorative approaches and sounds of the instruments.

Dave Storey is a London-based drummer, composer and band leader. Since finishing his studies at Middlesex University and Royal Academy of Music, Dave released 2 critically acclaimed records with his own Trio. His most recent record was described by The London Jazz News as “…twisty trips around post-bop topography, fuelled by high-octane virtuoso drumming”. Apart from his own trio and Agata Kubiak Quintet, Dave collaborates with Tom Barford Group, Tom Smith Septet, Tom Millar Quartet and Moostak Trio to name a few.