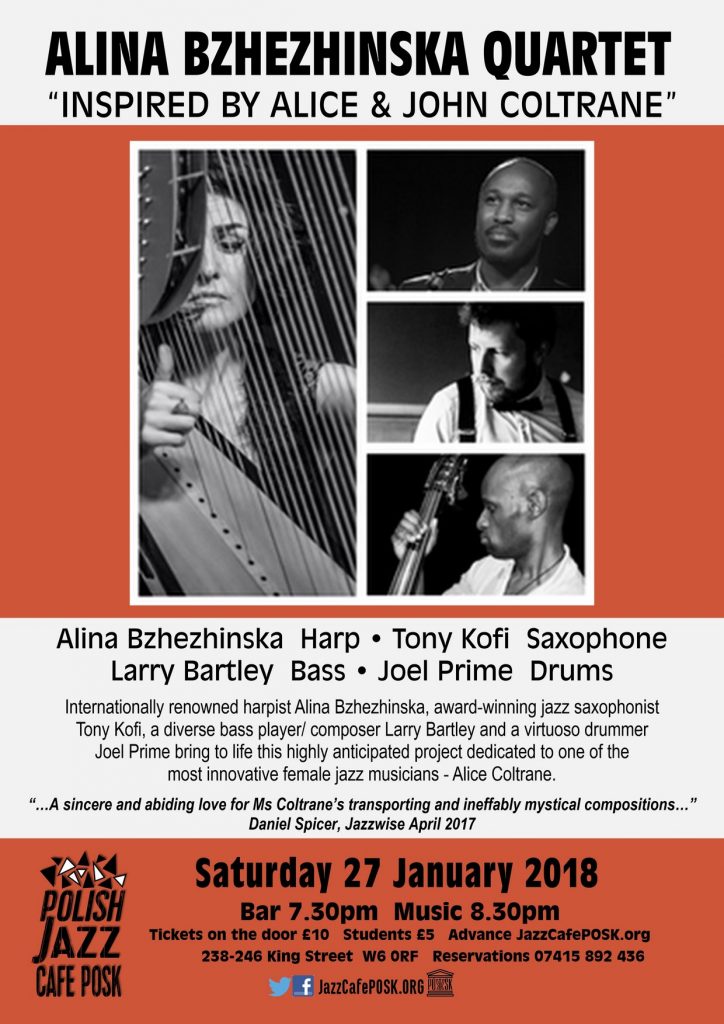 Internationally renowned harpist Alina Bzhezhinska, award-winning jazz saxophonist Tony Kofi, a diverse bass player/ composer Larry Bartley and a virtuoso drummer Joel Prime bring to life this highly anticipated project dedicated to one of the most innovative female jazz musicians - Alice Coltrane. They celebrate the double anniversary of Alice Coltrane birth and death (1937-2007) by performing their arrangements of her compositions from the albums such as Journey in Satchidananda, Ptah The El Daoud and Eternity as well as her latest release by Luaka Bop The Ecstatic of Alice Coltrane Turiyasangitananda.

"...Bzhezhinska’s superlative touch on the instrument does her role
model proud..."
Kevin Le Genre, Jazzwise May 2017

Originally from Ukraine/Poland, ALINA BZHEZHINSKA (www.alina-harpist.com) has become one of the most innovative international harpists, based in London.

She has created imaginative concert programmes and recorded with leading classical and jazz musicians: such as Django Bates, Miguel Atwood-Ferguson and the Glasgow String Quartet. Alina’s London appearances include Shakespeare’s Globe Theatre, live on BBC Radio 3, the London Jazz Festival and the London Film Festival. Her duo with award-winning jazz vocalist Niki King recently performed as a support act for Gregory Porter.

Alina’s critically acclaimed Quartet with Tony Kofi (Saxophones), Larry Bartley (Bass) and Joel Prime (Drums/Percussion) has appeared at Jazz Legend Festival in Birmingham and leads the celebration of Alice Coltrane 80th Birthday at many venues around the country, including top London jazz clubs, such as The Crypt and The Vortex. Alina Bzhezhinska Quartet will appear at the London Jazz Festival 2017 in a triple bill performance along with Coltrane’ s specialist Denys Baptist and the legendary saxophonist Pharoah Sanders.

TONY KOFI Having 'cut his teeth' in the “Jazz Warriors” of the early 90’s, award-winning saxophonist Tony Kofi (www.tonykofimusic.com) has gone on to establish himself as a musician, teacher and composer of some authority. Tony’s playing has also been a feature of many bands and artists including “US-3” World Saxophone Quartet, Courtney Pine, Donald Byrd, Eddie Henderson, The David Murray Big Band and Sam Rivers, Andrew hill, Ornette Coleman, Nu-Troop and Jazz Jamaica. His fluent and fiery hard-bop soprano/ alto/ tenor playing is constantly in demand.

LARRY BARTLEY is a bassist / composer who has been a staple of the London & international jazz scene for the past 20 years as a side man and as a leader. His 2003 debut album, "ALONG THIS WAY" was nominated for 'best new work" in the BBC JAZZ AWARDS.

Australian drummer JOEL PRIME has become an important addition to British jazz. He was awarded most outstanding percussionist at Generations in Jazz by James Morrison, received a prestigious performance award from Downbeat magazine (USA) as a member of the Adelaide University Big Band 1. Joel also received the Helpmann Academy Award for Jazz Drums at the Elder Conservatorium and received the 2010 Helpmann Academy Award for most outstanding Honours graduate. 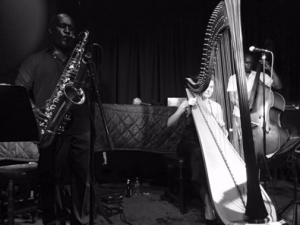