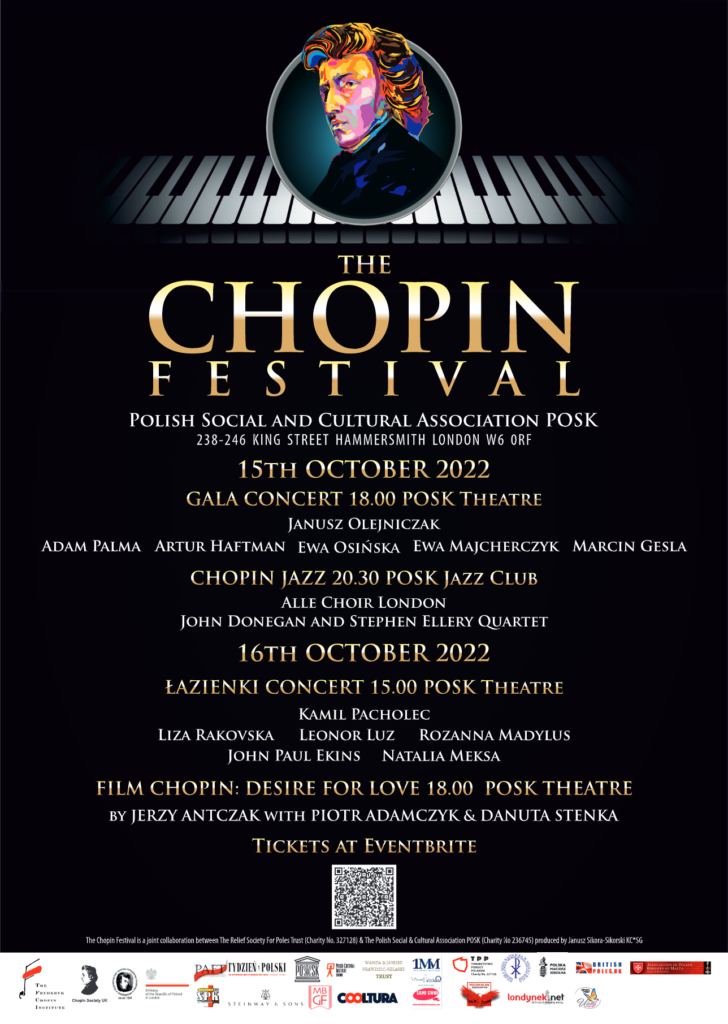 Immediately following the Chopin Gala Concert in POSK Theatre on the 15th of October, the POSK Jazz Club will host Chopin Jazz, an evening of Chopin compositions voiced and played in the jazz idiom. The vocally sublime Alle Choir London will deliver their interpretation of Chopin melodies. The gifted “bebop” John Donegan on piano together with the animated Stephen Ellery on saxophone, along with their musicians, will open the evening with inspired jazz arrangements of treasured Chopin classics.

The Chopin Festival, to be held over the weekend of the 15th/16th October 2022 at the Polish Social and Cultural Centre POSK in London is a celebration of Poland’s uniquemusical genius, Fryderyk Chopin. All music performed at the festival will be by the maestro, with audiences enjoying well-loved traditional performances by some truly exceptional musicians, as well as inspired new arrangements and interpretations of the classics, designed to delight and amaze the inquisitive ear.  A variety of Chopin events (for both children and adults) will accompany the musical festivities.

The musical journey will begin on Saturday the 15th of October at 18.00, when the POSK theatre will stage a Gala Concert starring the outstanding pianist and International Chopin Competition Laureate Janusz Olejniczak, as well as the brilliant guitarist, Adam Palma playing unique arrangements from his album, Adam Palma meets Chopin.  A selection of Chopin songs will be sung by the remarkable voices of Ewa Majcherczyk (soprano) and Marcin Gesla (baritone) accompanied by the wonderful Ewa Osińska  on piano. The Gala concert will begin with the much-praised Artur Haftman playing the exquisite Romanza from Chopin’s Piano Concerto no.1 in E minor Op.11.

Immediately following the Gala Concert on the 15th of October, the POSK Jazz Club at 20.30 will host Chopin Jazz, an evening of Chopin compositions voiced and played in the jazz idiom. The vocally sublime Alle Choir London-feat. Kevin Fox will deliver their interpretation of Chopin melodies. The gifted “bebop” John Donegan on piano together with the animated Stephen Ellery on saxophone, accompanied by their musicians, will open the evening with inspired jazz arrangements of treasured Chopin classics.

On the afternoon of Sunday, the 16th of October at 15.00, the POSK theatre will present the “Łazienki” concert, featuring the star Chopin Competition finalist Kamil Pacholec and the outstanding pianist John Paul Ekins with the captivating dance artist Natalia Meksa accompanying him on some of the compositions.  Their performances will be complemented by a special collaboration between the harpist, Liza Rakovska and the flautist Leonor Luz   - with a guest appearance by the wonderful mezzo-soprano Rozanna Madylus.

John Donegan - originally from Cork, the jazz pianist and composer is now largely based in London. John’s music has been featured on the BBC, Jazz FM, RTE and on independent radio stations both in the UK and in Ireland and seen him performing with a variety of UK and International artists including Art Blakey, Art Farmer and Barney Kessel among others. His major musical influences include Bill Evans, Wynton Kelly, Bud Powell, Chick Corea and Keith Jarrett.

Alle Choir London formed in 2015 by Marta Mathea Radwan, is an accomplished vibrant group of Polish singers based in London. Their repertoire spans jazz standards, modern vocal compositions, Christmas carols and winter songs. Their latest program, „A Polish Side of Jazz”, generously demonstrates their talent with their treatment of polish jazz songs and movie themes. Alle Choir London sings both a cappella and with instrumental backing. Either way, their rich harmonies and sense of fun is delivered in abundance.

A Toronto native now based in London, Kevin Fox is known internationally for his work as a singer, choral director, coach, adjudicator, and arranger. From 2007 to 2019 he was the baritone/vocal percussionist for the Grammy-winning group The Swingles. Since 2013 he has served as Artistic Director of the Israeli pop choir Vocalocity, and in 2017 he was Music Director on the British television show Sing: Ultimate A Cappella. Kevin’s list of teaching/workshop/adjudication credits include Vocal Asia (Japan), Europa Cantat (Estonia), Vocalmente (Italy), Rocky Mountain Festival (Canada), Guildhall School of Music and National Youth Choir of Great Britain (UK), and the ICCAs (USA). Kevin has a passion for helping singers and ensembles to unlock their creative music-making potential.

Stephen Ellery is a multi-instrumentalist, orchestral conductor, and arranger but his first love is playing the saxophone. He grew up playing guitar at home and later took his father’s saxophone and never gave it back. Self-taught, a graduate from the school of life, he honed his talent by jamming as a member of various bands playing Jazz in bars and restaurants. His reputation playing saxophone enabled him to record with various Polish artists like Darek Malejonek, Tamerlane and Grzegorz Ciechowski. He has worked around the UK with RioBrass playing at gigs such as street festivals, as well as having performed with Bossa Nova singer Mario Bakuna on his project Brazilian Landscapes in clubs as far afield as Germany, Spain, Portugal, Denmark – and next year he will tour the USA.