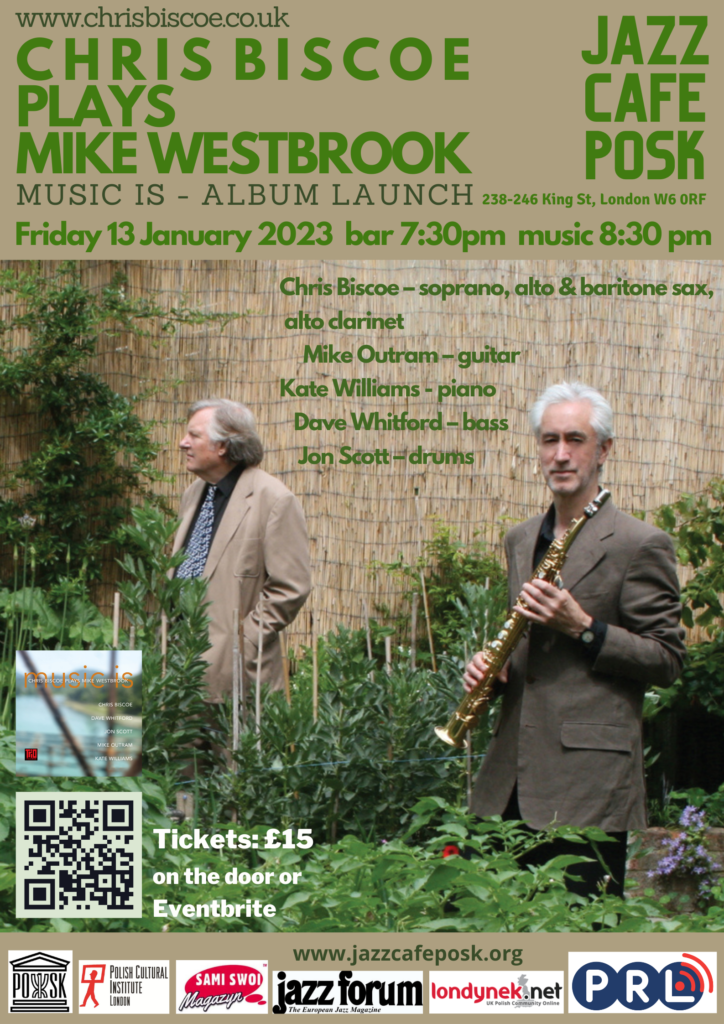 Mike Westbrook is one of the most important composers in jazz with a huge body of work from small band jazz through big bands, cabaret, fusion, chamber works, opera, settings of poetry, creative re-workings of Rossini and The Beatles’ Abbey Road, while always retaining his unique character.

Chris Biscoe has worked with Mike and Kate Westbrook since 1979, from Mama Chicago and The Cortege through On Duke’s Birthday, London Bridge is Broken Down, Bar Utopia, Art Wolf and many other shows. Their closest and most enduring collaboration is The Trio, which has toured extensively and produced four records.

The idea behind Music Is is a simple one: take some of these great pieces out of their context and play them with a small jazz group as you might an Ellington, Monk or Gershwin song. Arrangements are simple, or created in the studio in partnership with input from the members of the quintet. The title track, Music Is, appears twice, in its original ballad tempo, and in a spontaneous trio recasting as a medium tempo waltz. There are also two unaccompanied sax tracks, one of them a multitrack improvisation for alto sax, alto clarinets and field recording of street sounds.

“Everything about Music Is: Chris Biscoe Plays Mike Westbrook is near perfect: the simplicity of the concept, the choice of material, the uncluttered nature of the arrangements, the quality of the performances, the clarity of the recording. A little gem” - Chris May, All About Jazz

Kate Williams solos with a rare economy, combined with great rhythmic drive and invention. She plays in Chris Biscoe’s ‘Profiles of Mingus’ and has released eight records of her compositions. Finding Home was the Parliamentary Jazz Awards winner for Best Album in 2020.

Dave Whitford’s unique sound is characterised by great depth and drive. He was a member of the fabulous Bobby Wellins Quartet with Liam Noble and Dave Wickins, and recorded Brubeck with the Liam Noble Trio. Credits include The Christine Tobin Band, Josephine Davies Satori, Hans Koller Ensemble, and Bill Frisell, Steve Lacy and John Taylor.