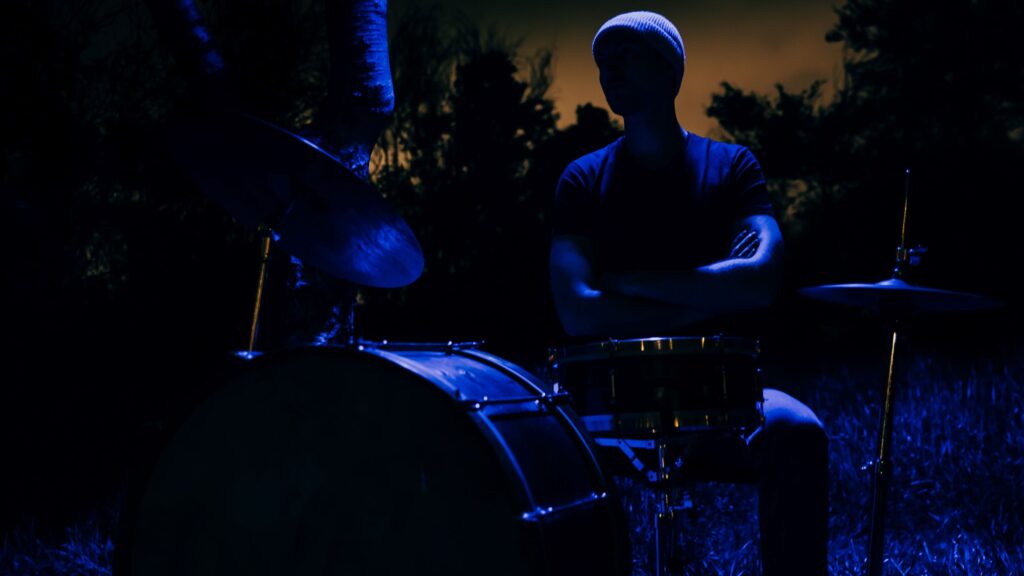 On 28th of October 2022 Corrie celebrates the launch of "Sun Swells" with a star-studded quintet of collaborators!

At the rhythmic epicentre of a new era of innovative British jazz is Corrie Dick, a musician and composer specialising in euphoric, sonically inventive drumming. He is lauded for his dynamism, his melodic slant and for his playfully subversive take on style and genre. An artist of prolific and varied output, Corrie; has long been an essential component of Laura Jurd’s music including Mercury Prize shortlisted Dinosaur; is a crucial co-pilot in Elliot Galvin Trio and Rob Luft Group; and co-writes music with an abundance of artists including alternative Indie band Ink Line. His 2015 release Impossible Things which skilfully fused Celtic folk and contemporary jazz with new takes on African rhythms culminated in sold out touring and concerts across the UK. Now Corrie resets for an album which further embraces the eclectic whims of a child of the iPod shuffle generation - finding cohesion among disparate elements.

As a multi-instrumentalist who has recorded on piano, vocals, synth, guitar and trumpet, Corrie’s writing is uniquely colourful and his playing shaped by many perspectives. The new album Sun Swells showcases all of this. Anchored by a rock guitar trio but with layers of fruity surprises, surging vocal melodies are counterpointed by mercurial horn playing. There is captivating prose written by guest vocalists Dave Malkin of the English folk tradition and Greek-Norwegian Marianna Sangita.

Now an active participant in Southeast London’s evergreen arts scene, Deptford, the young master of contemporary drumming has studied traditional music in Ghana and Morocco where the grooves are rich and layered, and in his homeland, Scotland, where rhythm and melody have melded for centuries.

He has been mentored by the likes of Mark Guiliana and Kendrick Scott, as well as kpanlogo master Saddiq Addy, nephew of the legendary Mustapha Tettey Addy. He has studied the traditional and modern music of Zimbabwe, Madagascar, Benin and DR Congo alongside his prodigious creative companion, guitarist Rob Luft. Corrie is an original, open-minded, questing talent who is expanding the parameters of what it means to be a drummer.

Concerning the idea behind Sun Swells, his latest project, Corrie explains: “I wanted to write a jazz album that had rock instrumentation at its core: guitar-bass-drums. Rob Luft (guitar), Tom McCredie (bass) and I have been improvising and writing together for years and years and we’ve forged a sound that is uniquely crunchy yet summery, so I wanted that sound at the centre but decorated with all sorts of elements. I basically wanted to make folk-rock-jazz but treat it how electronic music producer Mura Masa treats his tracks--chucking the whole damn fruit bowl at the thing but somehow keeping space and air in the arrangement and the mix.”

The music on Sun Swells is highly unique in a way that is becoming a trademark for the highly gifted artist. Corrie continues: “This is outsider jazz; it’s extremely listenable music that has lots of very current, familiar ingredients but put together in a way you may not be familiar with. Some key elements include soaring folkish melodies, Scandinavian free jazz, 90s-kid grooves, a playful shunning of conventional jazz roles and form, stillness, turbulence, beautiful and ugly-pretty sounds, warmth, stunning lyrical imagery, climate change, feminism, and eclectic guests. It’s an album that embraces contrasts and spectra and that can be listened to in so many ways. It finds cohesion in the disparate.

The cast on the album comprises a venerable A-list of musicians in the young, dynamic segment of the always-morphing London jazz scene. Corrie explains: “The band is packed with prolific, special artists. The core of this group are musicians with whom I have loads of history in other groups - Laura Jurd (Dinosaur), Rob Luft, Tom McCredie (Elliot Galvin Trio), Joe Wright, Alice Zawadzki, Matt Robinson, Joe Webb. It’s unusual to have such pure synergy between so many musicians at the same time.”

“The trumpeter [Laura Jurd] herself and expressive drummer Corrie Dick are both sensations who have made big names for themselves straight out of the blocks. Compared to other genres, jazz doesn’t really thrive on hype. Their secret is just that they’re really, really good.” (London Jazz News)