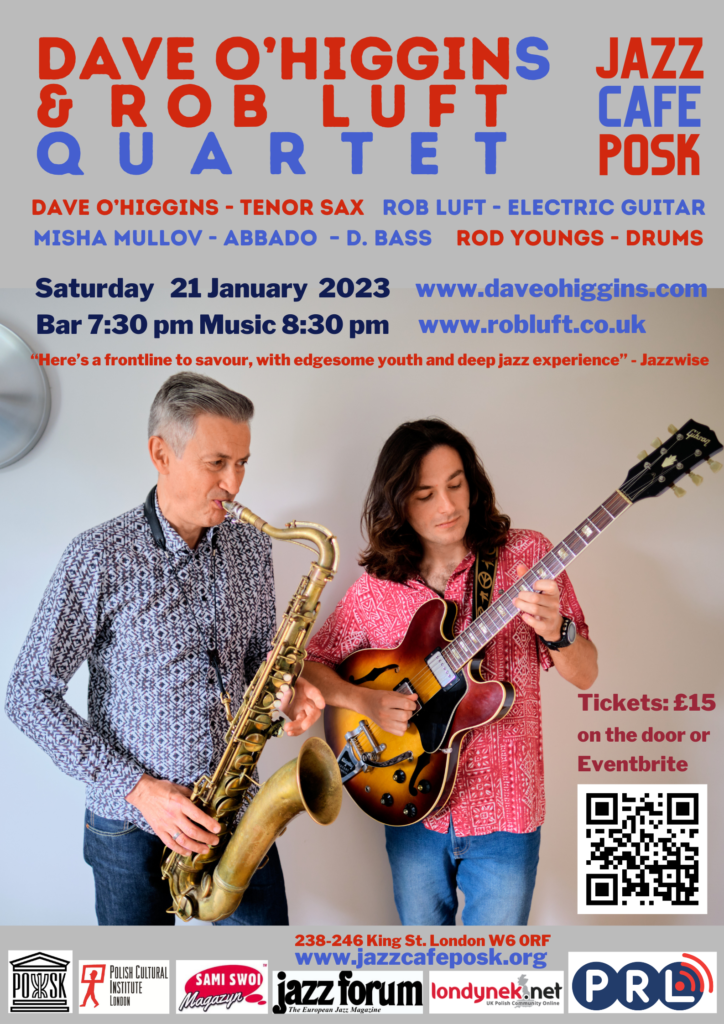 Saxophonist Dave O’Higgins & guitarist Rob Luft now present their 2nd co-led recording three years after “Play Monk & Trane”. Where the first album clearly did what it says on the tin, “Pluto”, as the title suggests, comes from another place. Seven of the 9 songs are originals, and the remaining two are Monk & Trane hits from the 40-plus date tour in 2019 that evolved on the road. The sonority has changed a little, too, with the Hammond organ of before replaced with piano and bass. This is straight-ahead modern jazz in the African-American tradition, clearly coming from the Monk and Trane lineage, but not bound to emulating it. You will hear Luft easily morphing Wes Montgomery with Bill Frisell, his own trademark soundscapes and worldly influences, while O’Higgins’ emotive melodies evoke Dexter, Trane, Joe Henderson and Brecker, with a melodic logic of his own.

This opened up a place for the exciting sound of Misha Mullov-Abbado on bass. American drummer, Rod Youngs, so integral to the vibe of the band, completes the line-up.

Saxophonist Dave O’Higgins has 24 albums as leader to his credit. The last Ubuntu release “That’s the Way to Live” (2021) has had great reviews in the Observer, Jazzwise, BBC Magazine & many online jazz sites. In 2017 “It’s Always 9:30 in Zog” was nominated for best CD (British Jazz Awards) & Dave for best tenor saxophonist. O’Higgins & Luft were nominated for best band in 2020 Parliamentary Jazz Awards. Dave serves on the faculty at the London College of Contemporary Media. He currently performs with the Harvey / O’Higgins Project, O’Higgins & Luft, Darius Brubeck Quartet, and the Ronnie Scott’s Jazz Orchestra. Dave also wrote and produced the 2017 Matt Bianco album, “Gravity” and tours with the band as saxophonist & musical director.

Rob Luft is an award-winning 28-year-old jazz guitarist from London whose virtuosity has been compared to that of six-string legends John McLaughlin, Al Di Meola & Paco De Lucia. He was the recipient of the 2016 Kenny Wheeler Prize from the Royal Academy of Music, and he also received 2nd Prize in the 2016 Montreux Jazz Guitar Competition at Montreux Jazz Festival. His debut album, “Riser”, was released on Edition Records in 2017 to widespread acclaim from the European media. John Fordham wrote in The Guardian that it’s a “very sophisticated debut, but given Luft’s old-soul achievements since his early teens, we should have heard it coming”. In May 2019, Rob was selected as a BBC New Generation Jazz Artist in conjunction with BBC Radio 3.

“A bold and deftly performed venture. The playing throughout is quite superb” -  The Guardian