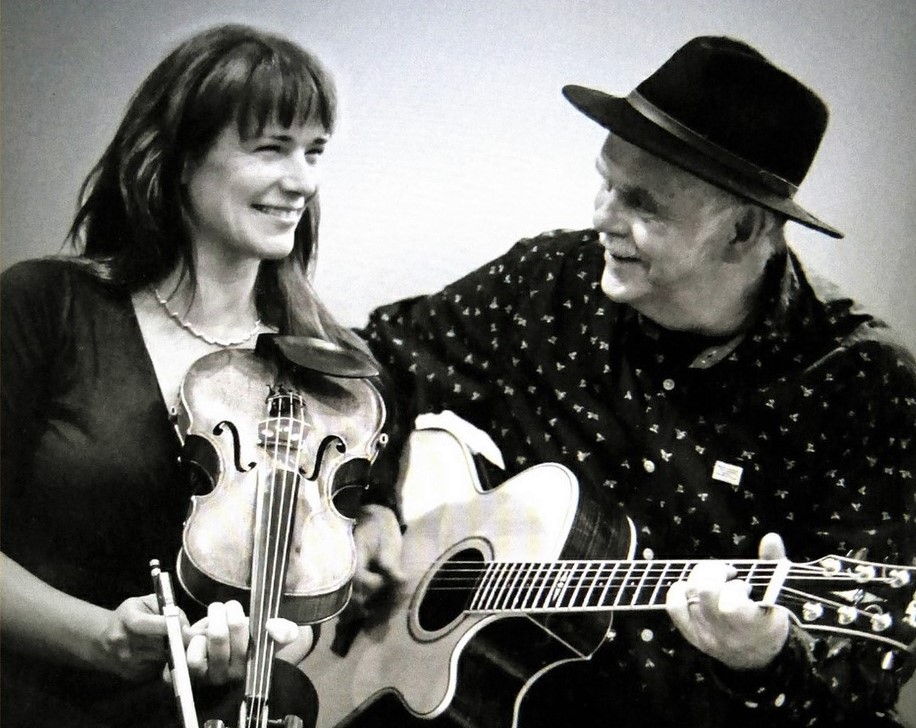 Voted “Acoustic Blues Artist of the Year” three times by the British Blues Connection and Blues In Britain Magazine… guitarist, vocalist, raconteur Dave Peabody began performing in the mid ‘60’s during the heyday of the great British blues boom. 2022 marks Dave’s 58th year as a gigging musician making him one of the most experienced and seasoned British blues men performing today. His latest album Some of These Days (released March 2019) is a joint collaboration with Regina Mudrich, a classically trained violinist, originally from East Germany.

Regina studied for nine years at the Franz Liszt Special School of Music in Weimar, GDR. She currently lives in Bremen, Germany. Between 2003 and 2008 Regina performed, and recorded 2 CD’s, with the Rialto String Quartet (one which was recorded at the Berlin Philharmonic). Since 2008 she has been an event manager at Gewoelbe, Vegesack, Bremen, an intimate venue that attracts a variety of international artists. Regina has jammed there recently with both Australian singer/songwriter Brett Hunt, and award winning British folk artist Lucy Ward.

Dave first met Regina in October 2014, the day before he was due to perform his own concert at the Gewoelbe Vegesack. It had been arranged for him to stay at Regina’s house for a few days before the scheduled recording dates for his proposed solo album Right Now Blues. Having discovered Regina’s musical skill, and with three days available to rehearse, Dave, without hesitation, invited Regina to the studio to record some tracks. Although blues was not previously part of her repertoire, her sensitivity and immediate grasp of the music adds a fresh feel to the selection of old blues and vaudeville songs that Dave had chosen to record.

Dave Peabody has previously released ten albums under his own name and has also appeared on over forty albums with other artists including Grammy Award winning harmonica player Charlie Musslewhite, Cincinnati pianist Big Joe Duskin, North Carolina bluesman Big Boy Henry, and harmonica players Chicago Bob Nelson and Neal “Big Daddy” Pattman. Dave has performed at clubs and festivals in over 20 different countries (including the USA) and he’s forged connections with many American blues artists including Mississippi legend David “Honeyboy” Edwards, accompanying him on numerous British and European tours. Over the years Dave has played on stage with a host of other American blues men including Sonny Terry, Memphis Slim, Louisiana Red, Dave Van Ronk, and John Hammond Jr.

As well as performing as a solo acoustic artist specializing in early country blues, for twelve years Dave fronted the King Earl Boogie Band whose members included Mungo Jerry pianist Colin Earl and Status Quo drummer John Coghlan. The band appeared at many festivals including Colne’s Great British R’n’B Festival, and at festivals in Germany, Ireland, Italy, Slovenia, and Spain. The group disbanded at the end of 2013 so Dave returned to playing the blues acoustically as a solo artist, as a duo with ex-Yardbirds harmonica player Alan Glen or, with the addition ofpianist Tim Penn, as The Dave Peabody Trio. During the past five years the majority of Dave’s gigs have been with Regina Mudrich touring in both the UK and Germany.

In Regina, Dave has found yet another intriguing musical partner. The blues rolls on!!

“Dave Peabody enhanced his reputation as one of our most popular acoustic artists. There’s only one way to sum up this special evening - this was the Blues!” - Blueprint online review of 100 Club gig by Darrell Parsons)