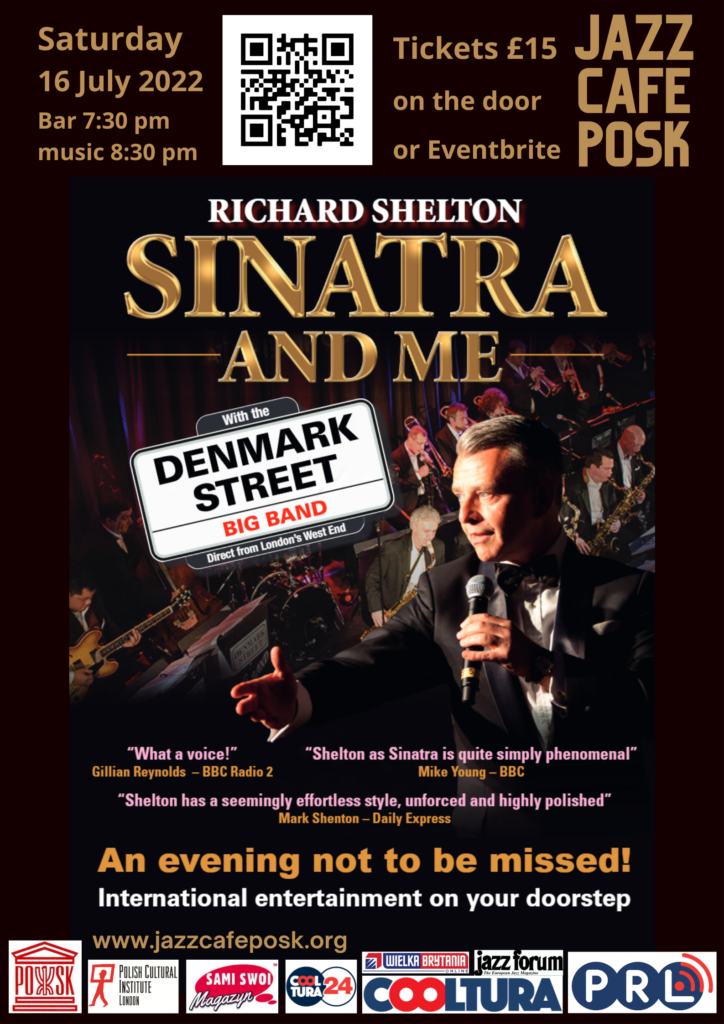 The Denmark Street Big Band will be back at Jazz Café POSK for a very special show!

Paul Burch called upon musicians & friends who had played together from his time playing with The Coldstream Guards and playing with bands on-board luxury cruise liners. The band members have performed with some of the biggest names in the music business & have played in many West End Musicals. After assembling the musicians & taking it name from the London street that has been the heart of British music scene, The Denmark Street Big Band was born.

Richard Shelton’s critically acclaimed, sell-out show ‘Sinatra and Me’ has toured globally from South Africa, New York, London, L.A., Korea and will soon visit Japan, China and New Zealand. The show charts the extraordinary synchronicity and coincidences between their lives. During the show, he wears Sinatra’s very own tuxedo, which literally walked into his life and fits like a glove.

The L.A. based actor and singer, Richard Shelton, is known for his on-screen appearances in the feature films My Week with Marilyn, I Capture the Castle and Brash Young Turks, House of Lies (US) and a the charmingly murderous Dr Adam Forsythe in ITV’s Emmerdale.

As a singer, Richard recently recorded his album An Englishman in Love in L.A. at Capitol Studios, L.A. alongside some of Sinatra’s original musicians. Other recordings include The Abbey Road Sessions with a 65-piece orchestra.

Richard is an advocate of living in the moment. “If you never have a dream, you can never have a dream come true”, he says. “If I ever wonder about doing something, I’m reminded of the sobering fact that you’re a long time dead. Just do it!”

“Shelton displays impeccable elocution, confidence and a solid sense of swing. Whilst the ballads are given proper sensitivity, it is the swingers (such as the joyous and witty 'An Englishman in Love in LA') that are the real standouts. Shelton really knows how to build up his performance, chorus by chorus. This is a CD that will appeal to anyone who enjoys top-notch jazz-inspired crooners!'” (Scott Yanow, LA Jazz Scene)

“Shelton is a superior singer who tips his hat to a legend with grace and elegance on 'An Englishman in Love in LA' - an album that Sinatra himself would be proud of, well done!” (Edward Blanco, All About Jazz, LA)