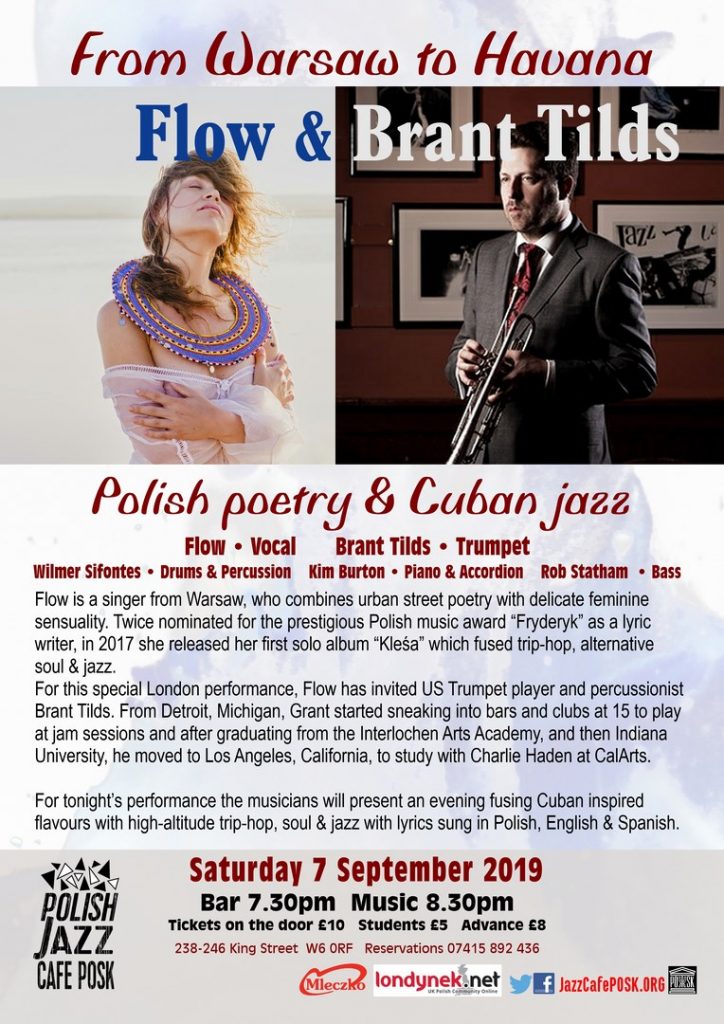 Flow is an artist from Warsaw, who uniquely combines dirty street poetry and delicate feminine sensuality. Her first record, with the Blow’s project "If you feel ...", achieved

spectacular success in Poland. Currently, it is considered one of the most iconic and precursory in the genre of urban music.

FlowSan was twice nominated for the most important Polish music award - ‘Fryderyk’, as a lyric writer for Skubas’s album. In 2017 she released her first solo album "Kleśa", which surprised with the combination of trip-hop, alternative soul, jazz and exceptional Flow lyrics. Last year she got signed to Warner Music Poland and she’s recording a new music project called 'Puma Project' in Barcelona. The first single - ‘PiliPalili’ - is already on rotations of the most important radio stations in Poland.

Trumpet player and percussionist Brant Tilds was born on a U.S. Air Force Base in South Carolina during the Vietnam War. He grew up in Detroit, Michigan, and started sneaking into bars and clubs at 15 to play at jam sessions, and joined the Musicians’ Union at 16. After graduating from the Interlochen Arts Academy, and then Indiana University, he moved to Los Angeles, California, to study with Charlie Haden at CalArts.

There, he led his quintet, and his 10 piece group Latin Monster with Humberto Gomez Vera, and performed at various clubs and festivals around Europe. During this time in Copenhagen, Brant was commissioned to write a number of pieces for audio and video release (Zentropa Films)as well as recording on principal trumpet with the Dansk Radio Underholdnings for film soundtracks on Metronome, leading his quartet at the Copenhagen Jazz Festival, and premiering the Poul Erik Christensen Trumpet Concerto. Since his move to England in 2004, he’s performed at festivals and halls around Europe with acts from the Latin world such as Cheo Feliciano, Los Hermanos LeBron, Roberto Pla to the London Early Opera and a modern classical trumpet and piano duo (with a soon-to-be-announced-very-exciting program!) and released his 2nd CD as a bandleader, GREEN GOLD.

It was back in 1986 when a 16 year old Brant Tilds, trumpeter and jazz fanatic, met one of his idols Dizzy Gillespie in his hometown of Detroit, Michigan. The young Brant would often be hanging out at local jazz clubs in the hope that he might get a chance to play with some of his favourite jazz musicians, and that particular night he got lucky. Not only did he meet one of his heros in Dizzy Gillespie, Brant also played with Dizzy’s drummer Ignacio Berroa, largely known as the drummer who invented the ‘songo’ rhythm.

It was that meeting with Dizzy Gillespie and subsequent conversations with Brant that sparked a relentless pursuit for gaining a real understanding of what Dizzy had meant about his approach to playing jazz. Dizzy told Brant that, ‘the feel in jazz, that swing feeling really comes from the güiro (a percussion instrument) used in Cuban music.’ Dizzy Gillespie was one of the early innovators of Afro-Cuban jazz (the earliest form of Latin jazz).

That one conversation inspired Brant to go on a whirlwind tour of the world to find, learn and work with some of the world’s greatest Latin musicians. Now based in the UK Brant has come here from Detroit by way of Los Angeles and Copenhagen (where some of the best contemporary Cuban music can be heard outside of Cuba). 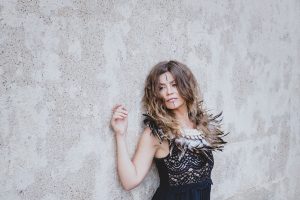 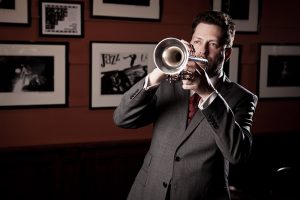