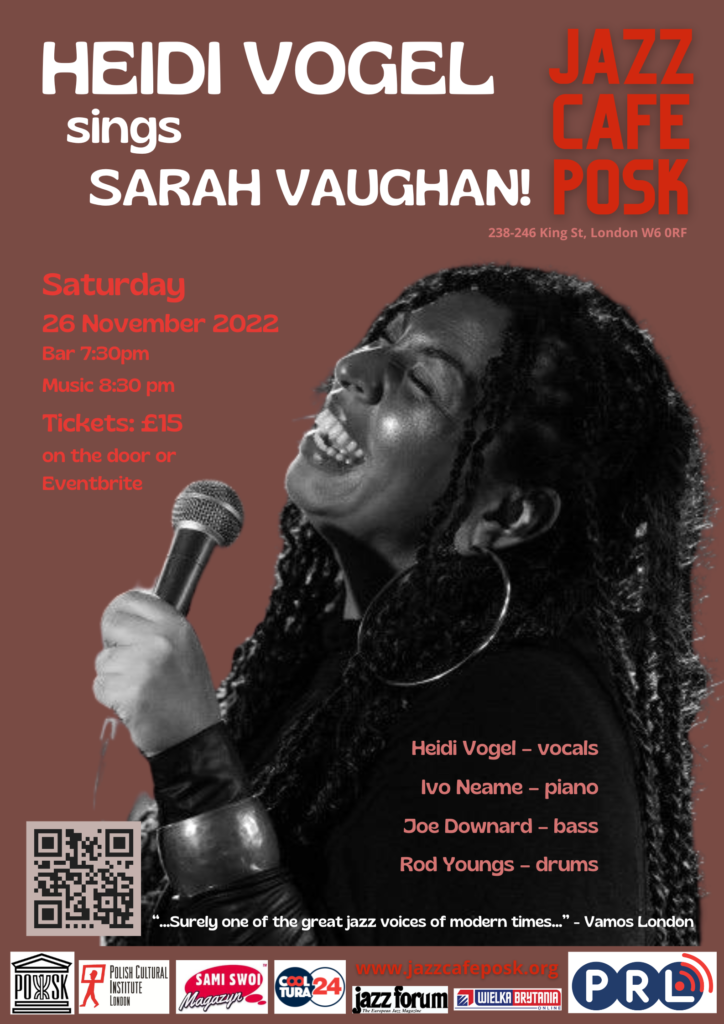 Vocalist and songwriter Heidi Vogel performs an evening of Sarah Vaughan songs, which is put together especially for the performance at Jazz Café POSK. Ivo Neame, musical director for the project, is an award-winning pianist and arranger.

Vocalist with The Cinematic Orchestra since 2006, Heidi appears on their albums  ”To Believe “, “Live at the Royal Albert Hall“ and  “Late Night Tales. She has opened for Erykah Badu in Dubai, performed at Montreux Jazz festival for Quincy Jones and appeared live on The Jimmy Kimmel Show on ABC, as well as performed at The Sydney Opera House and with The Krakow Symphony Orchestra, The Heritage Orchestra, The London Metropolitan Orchestra.

Heidi performed with The Cinematic Orchestra concluding a 2019 USA tour at the prestigious Los Angeles Walt Disney Hall where she performed with Patrick Watson, Moses Sumney, and Miguel Atwood Ferguson.

As a soloist, she performed for the 2019 BBC Proms at The Royal Albert Hall for a recital of The Sacred Music of Duke Ellington. Heidi’s performance with pianist Monty Alexander received rave reviews.

Heidi's debut album "Turn up the Quiet", received impressive reviews from Jazz Wise Magazine, Jazz Times Magazine, as well as support from Jamie Cullum, Benji B, Osunlade and many others. The album presents Heidi performing Brazilian Bossa nova and jazz classics. A contrast to her work in EDM house classics, as well as broken beat, hip hop and drum and bass.

“…She’s got an extraordinary voice….an incredible range to her voice and such a texture to it as well. You’ll really enjoy the album, keep an eye out for Heidi Vogel” – Jamie Cullum (BBC Radio 2

“…Vogel's extraordinarily rich and complex vocal timbre proved capable of completely seducing the senses... such that she can lift the soul while simultaneously breaking your heart” - The Arts Desk

“That Neame is one of the most interesting jazz pianists of his generation may be clear. That he is getting better and better is too. The 10 years of almost constant being on the road with bands has given him a prominent role in the front line of British jazz” – Written in Jazz