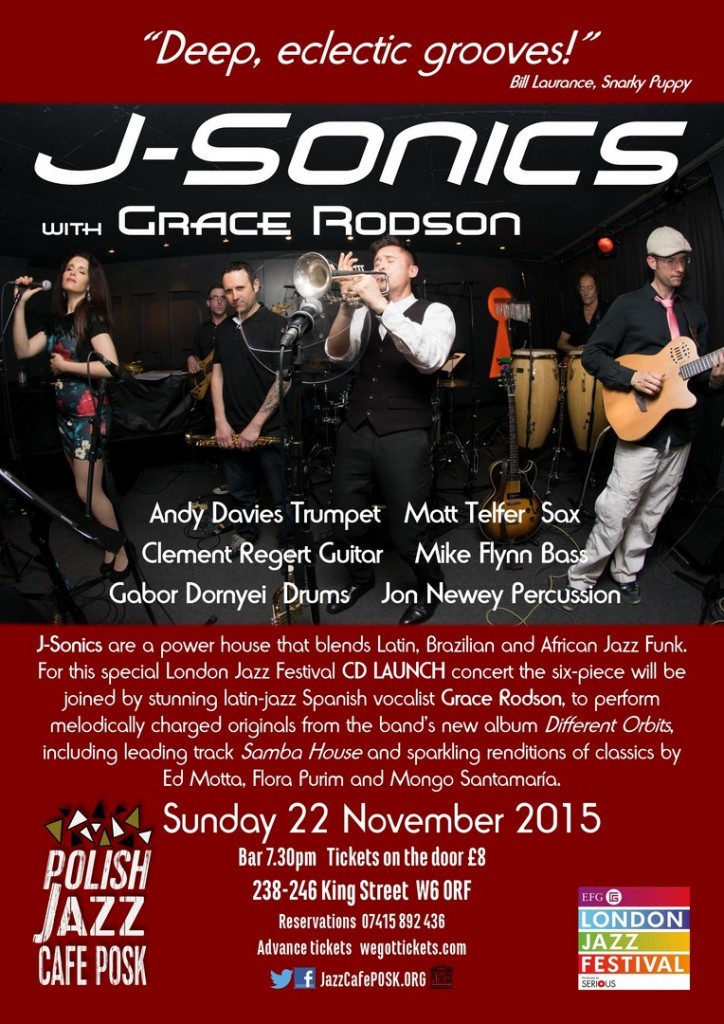 We welcome back onto our stage the fabulous J-SONICS as part of the EFG London Jazz Festival programme.

'The anatomy of the groove is still very much intact with J-Sonics. Their brand of rocket fuelled groove jazz has the after burners full on.' (Chris Philips, Jazz FM)

'These guys are truly on a mission to bring raw, razor-edged funk to British audiences.' (Young & Serious tweet)

Different Orbits is the propulsive debut album from J-Sonics, the six-piece collective who have emerged in the last two years as one of London’s hottest groove-driven jazz bands. Set for release on LYTE Records this November, the album brings together a fiery sax-trumpet front line that’s fuelled by imaginative guitar work, and a powerhouse bass, drums and percussion rhythm section. J-Sonics push the energy out front and have built a formidable reputation as a compelling live act through regular appearances at prestigious London venues such as Pizza Express Jazz Club, Hideaway and Spice of Life as well as a storming appearances at the 2014 Love Supreme Jazz Festival, 2015 London Latin Jazz Festival and two opening weekend appearances at the 2012 and 2013 EFG London Jazz Festival.

Led by bass guitarist and composer Mike Flynn, J-Sonics features some of London's finest musicians - all solo artists in their own right - but all collaborating within J-Sonics' exciting mix of memorable originals and re-tooled jazz, Brazilian, Afro and rare-groove tunes. Led by the powerful twin-horn attack of saxophonist Matt Telfer and trumpeter Andy Davies, alongside guitarist and composer Clement Regert, drummer Gabor Dornyei and powerful percussionist Jon Newey. Stunning Spanish vocalist Grace Rodson has been performing with J-Sonics for the last year and features on their debut album. Different Orbits was recorded in a single weekend, live and direct in Wax Studios in Dalston, and bottles some of the unique chemistry that has made this band such a hit on the live circuit. The dynamic ten-track album dives through a vibrant blend of street-funk, Brazilian and Afrobeat songs all shot through with captivating jazz solos, fluid improvisation and a ton of memorable melodies. Originals include cool strutting opener ‘Push’, the stirring Afro grooves of ‘Sing Your Own Anthem’ and ’12 Labours’, the twists and turns of ‘Little Ben’ and slamming closer ‘J-Sonics Theme’. There’s a sophisticated slice of soulful jazz funk too that morphs into a Latin-jazz burn up on the vocal-led single ‘Samba House’, one of three tunes to feature stunning London-based Spanish singer Grace Rodson. Her sublimely soulful vocals also feature on the thumping Brazilian-funk classic ‘Partido Alto’, (with a brilliant soprano sax solo from Telfer), and funky Ed Motta favourite ‘Bananeira’. Other choice covers include an electric Miles-ish take on ‘Mr Clean’ with scorching bass, trumpet and drum solos, plus the burning samba of ‘Casa Forte’.

Different Orbits is a punchy opening gambit from an exciting genre-hopping jazz collective – combining hook-laden originals and inventive reworkings of timeless gems, all given a distinctively energetic yet virtuosic spin.

This evening is part of our "Tomasz Furmanek Invites...." series. 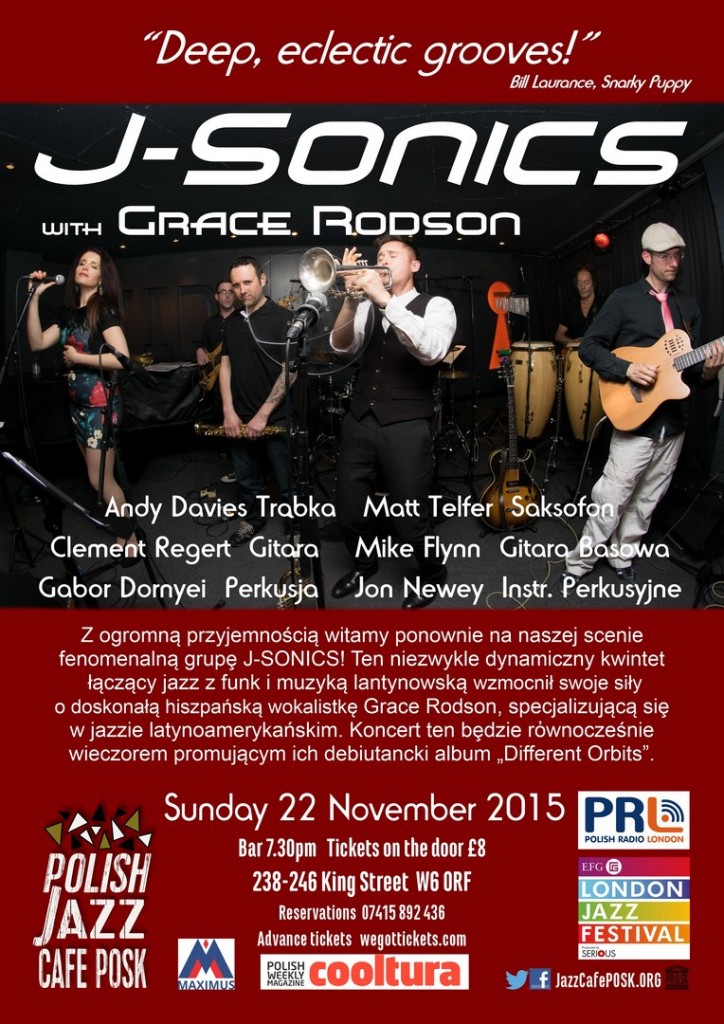 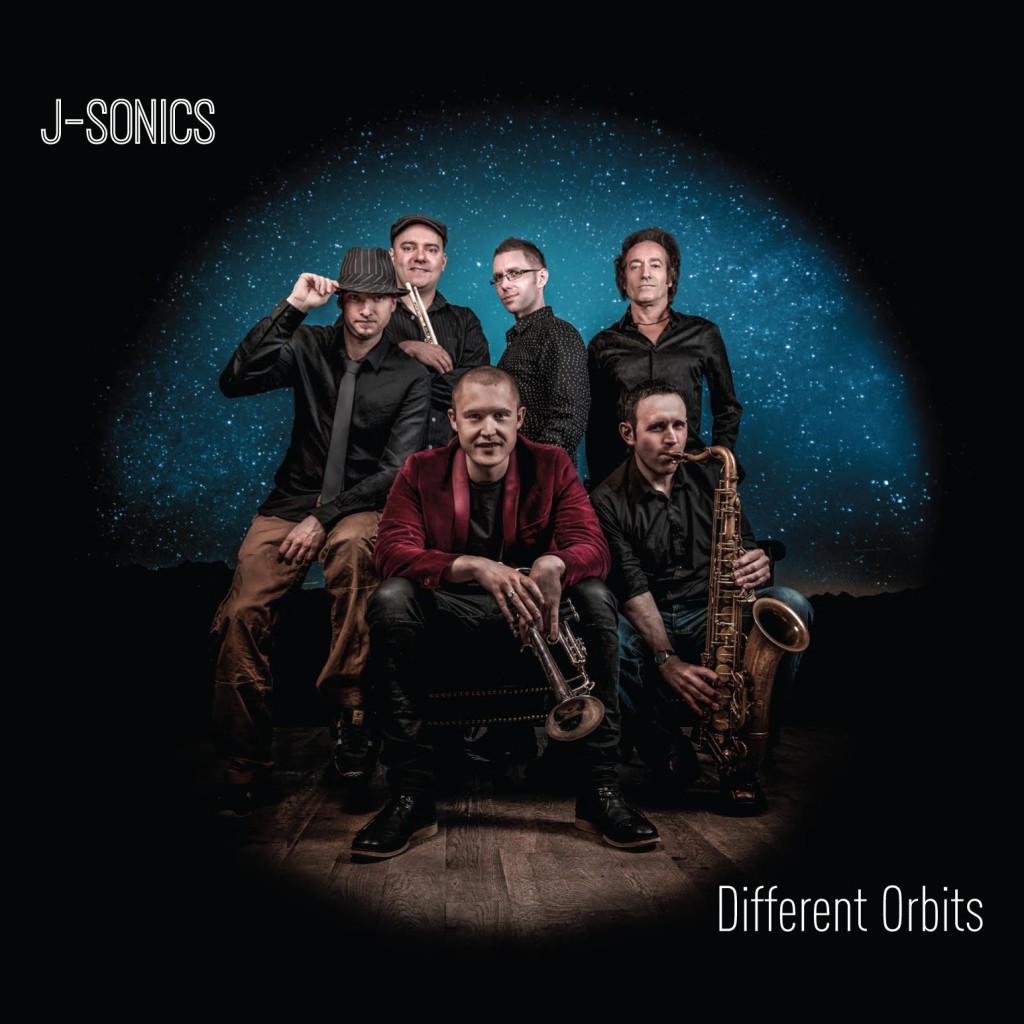