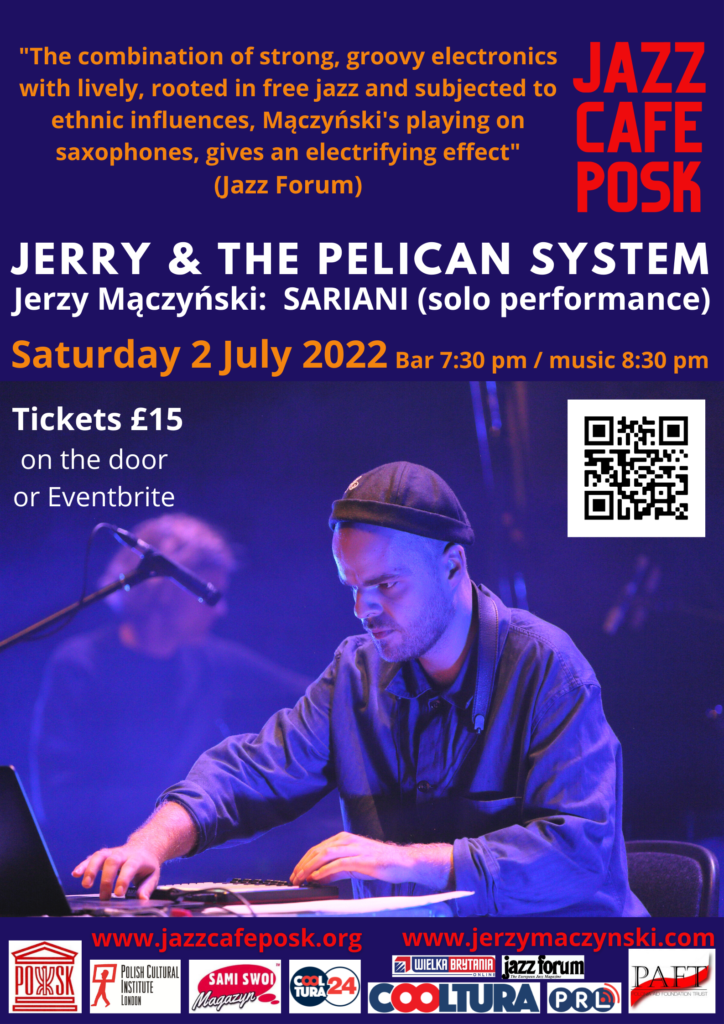 Jerry & The Pelican System will present music from his recent release “Sariani” which combines the slowly shifting electronic textures of ambient with his deep-rooted love of experimental and free jazz.

Jerry & The PelicanSystem is an alternative musical concept that’s headed by Jerzy Mączyński, young Polish Jazz and experimental saxophonist and composer, Master Student of Berklee College of Music. His previous, debut album was released in 2019 in the legendary and prestigious Polish Jazz series and contains music that defies classifications.

Jerzy Mączyński’s solo project „Sariani” presents music from his brand-new album released on a Dutch label yehyeh. Since launching in 2018, Pieter Jansen’s yeyeh label has excelled at delivering unusual and inspired collaborations between artists, here the Amsterdam-based curator and label owner has looked East to the Polish jazz underground.

The music of “Sariani” contains compositions like ‘Temple of Jetsu’, which an especially spiritual composition, fuses the melodic cycles of classic minimalism with similarly slowly unfurling electronic motifs and luscious ambient textures, while the title composition “Sariani” – a meditation on the plight of women in India – delivers a beautiful but sometimes uneasy mix of densely layered minor-key sax sounds, exotic and intoxicating solos, off-kilter electronic rhythms and enveloping synthesizer textures.

Jerzy Mączyński about the musical influences that shaped his embedded in the European avant-garde, style: “It's hard for me to answer this question fully, because the formation of my musical language is an ongoing process. I started with American jazz, I learned from following John Coltrane's path to more contemporary saxophonists like Canadian tenorist Seamus Blake with whom I have had classes many times. From this place I moved to a more European sound, already during my studies I became fascinated with Jan Garbarek and the improvised scene that far deviates from jazz standards, which takes place in Scandinavia or also in Germany, because Peter Brötzmann, German free jazz saxophonist and clarinetist is my great inspiration, also Mats Gustafsson, Swedish free jazz saxophone player. These are my later inspirations that last until now. I decided that I want to play music inspired by the improvisational style that prevails on our continent”