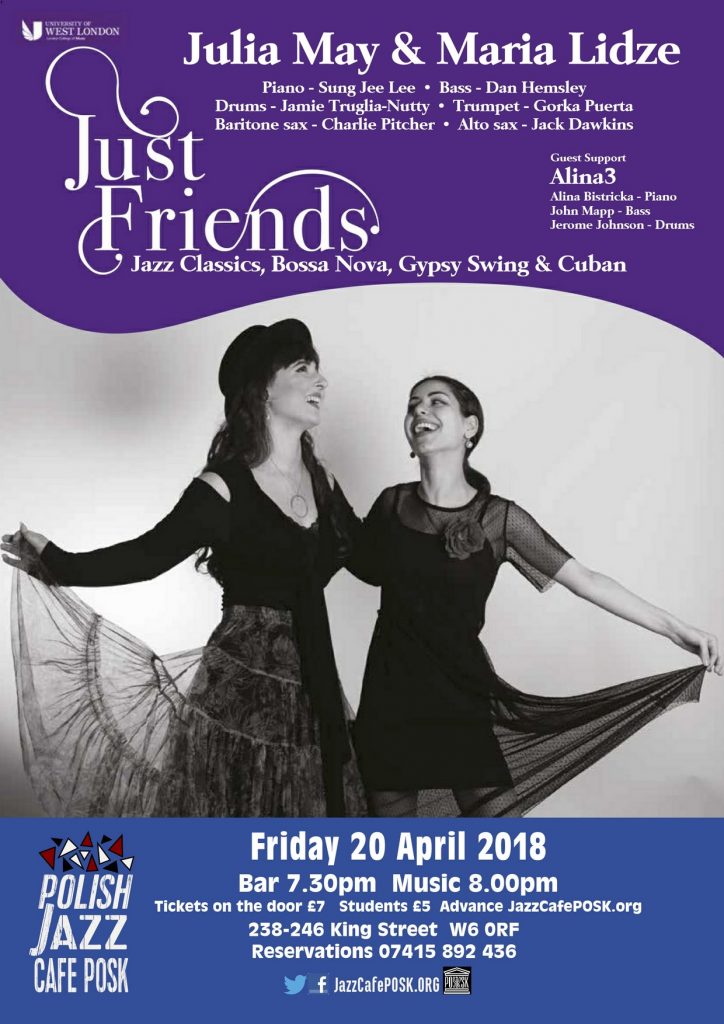 Just Friends is an evening hosted by close friends and jazz vocalists, Julia May and Maria Lidze. Julia and Maria met whilst studying jazz performance at the London College of Music and are now both in their final year. Just Friends is a celebration of doing what we love the most, singing jazz. The programme will feature a selection of our favourite jazz tunes, performed in a variety of styles including Bossa Nova, Gypsy Swing and Cuban. We will be accompanied by some of the best up and coming jazz musicians and supported by the brilliant Alina3 trio.

Julia May is a jazz vocalist in her third year at the London College of Music. Brought up by Beatle fans Julia was introduced to music at a young age. She received classical vocal training from the age of 10 whilst also learning keyboard and later, cello. Throughout her childhood she developed her classical singing by performing in numerous choirs and vocal ensembles. In 2010 Julia took up lessons with Paolo Nutini’s singing teacher, Avril McCusker, who helped to broaden her vocal repertoire with pop and soul. After experiencing a negative attitude from her school music teacher, Julia went on to study social sciences for a year before realising that music was her true passion.

Julia’s love of jazz singing was not conceived until 2012 when she attended two summer schools at the Guildhall School of Music and Drama where she learned about a variety of genres ranging from jazz, world music and gospel. In 2015 she moved to London from Scotland to study at the London College of Music and pursue her musical career. She has performed in a variety of venues in Britain, including the Slouch bar in Glasgow and the Greenwich jazz club. Julia’s eclectic taste in music and unique blend of vintage and Victoriana clothing contribute to her versatility as a performer. Her varied musical inspirations are Ella Fitzgerald, Julie London, Chet Baker, Frank Sinatra and more contemporary artists like Amy Winehouse, Gregory Porter, Laura Mvula and 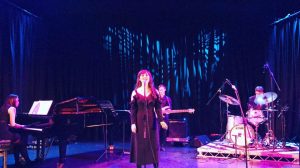 Maria Kherkheulidze is originally from Georgia but grew up in London. Her ambition and passion for music started to develop at the age of three, where Maria’s Father, being a Jazz/Opera musician himself, encouraged her to pursue her career as a singer. Not only is she a singer, Maria can also play the violin, reaching all the way to grade 8.

In 2007 she entered a competition abroad in an international Children’s Music program ‘’Ana Bana’, the TV company, Rustavi2 and won first prize. Since then Maria has constantly cultivated her interest in the arts such as Music, Drama & Dance, and by the age of 14, Maria performed in private events and gigs such as; The Hurlingham Club, (Charity Child and Environment) performing with Katie Melua & Anthony Strong, performed with famous Russian musician Andrey Makarevich at an Art gallery event, Violin concert in Hampton Court, Zedel Brasserie, Dorchester Hotel, Ritz Hotel and much more. Maria still continues to perform gigs and is currently studying in London College of Music, where she plans to get a degree. Her performances range from Jazz to Classical, from Pop to Funk and Soul to Rock. 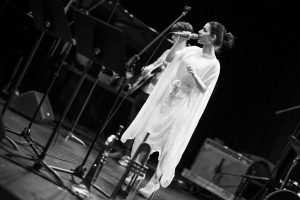