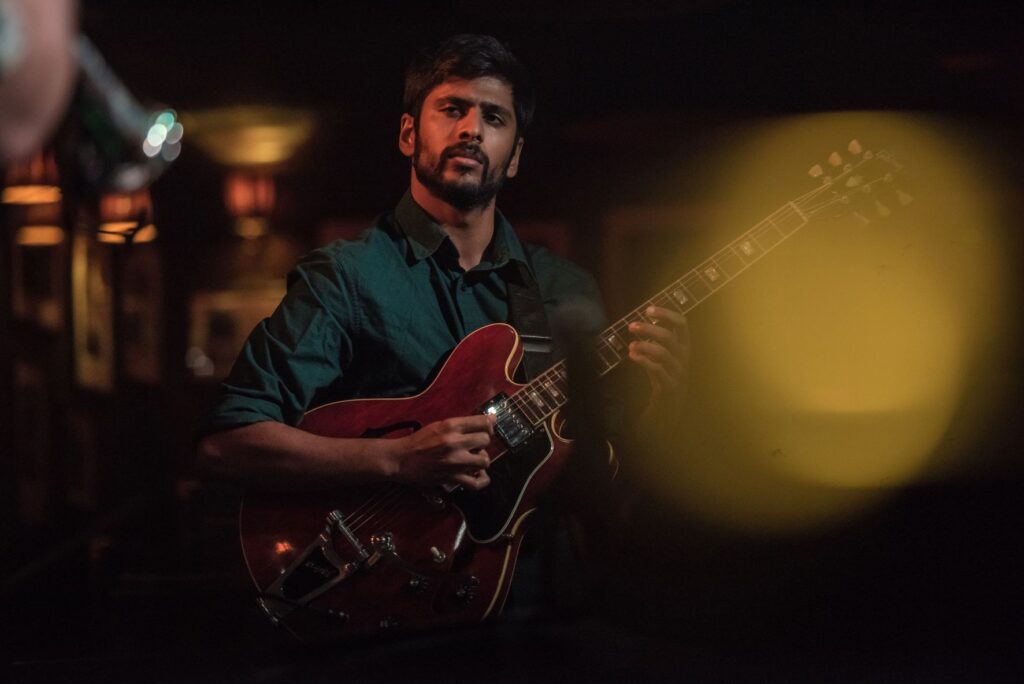 Mike De Souza grew up in Hertfordshire, where he first picked up the guitar at the age of 12, marking the start of a life-long obsession with music. His professional career began at the age of 20, and he has now completed 5 UK jazz tours, has performed festivals internationally in Krakow (Jazz Juniors 2021), Graz (Jazzwerkstatt 2017) and northern Spain (Ni CaJazz! and EGA Jazz festivals 2022), and has performed at many prestigious jazz clubs including Ronnie Scott’s, and Pizza Express, to name a few.

Since moving to London in 2012, he has worked with internationally renowned musicians including Terence Blanchard (2016), Martin Speake, and Byron Wallen, and has featured on numerous recordings as a sideman: Times Leap (Simon Read Octet), Reflector (Twospeak), Beware of the Bear (Phil Meadows), and Music for Bosch People (Alex Paxton).

In 2017, he co-released the album Pond Life as part of the group Big Bad Wolf, which was ranked 3rd in Jazzwise Magazine’s top 10 albums of the year and received many positive reviews: “The title track affirms how inventively the quartet juggle tone colour, constantly renewing sub-themes, and subtly shifting grooves” - John Fordham, The Guardian.

As a leader, Mike has released 2 recordings to date: an EP entitled ‘Road Fork’ (2018), and his debut album ‘Slow Burn’ (2019). “Slow Burn is an impressive show of musical innovation and displays the guitarist’s knack for experimentation as well as his roots in jazz tradition” - All About Jazz.

Currently, Mike leads his new project ‘Chrysalis’ performing original music composed during the pandemic. The band name alludes to the emergence from a state of isolation, having changed in a positive way, just as a butterfly emerges transformed from its chrysalis state. The band features some of the most distinctive improvisers on the London Jazz scene including Alec Harper (Sax), Rupert Cox (Keys), Huw V Williams (Bass) and Jay Davis (Drums).

At Jazz Cafe POSK, the Chrysalis band will perform a selection of Mike's original compositions, many of which can only be heard live, as they are not yet released as recordings. However, some popular tracks from Mike's previous releases 'Road Fork' and 'Slow Burn', will be performed.