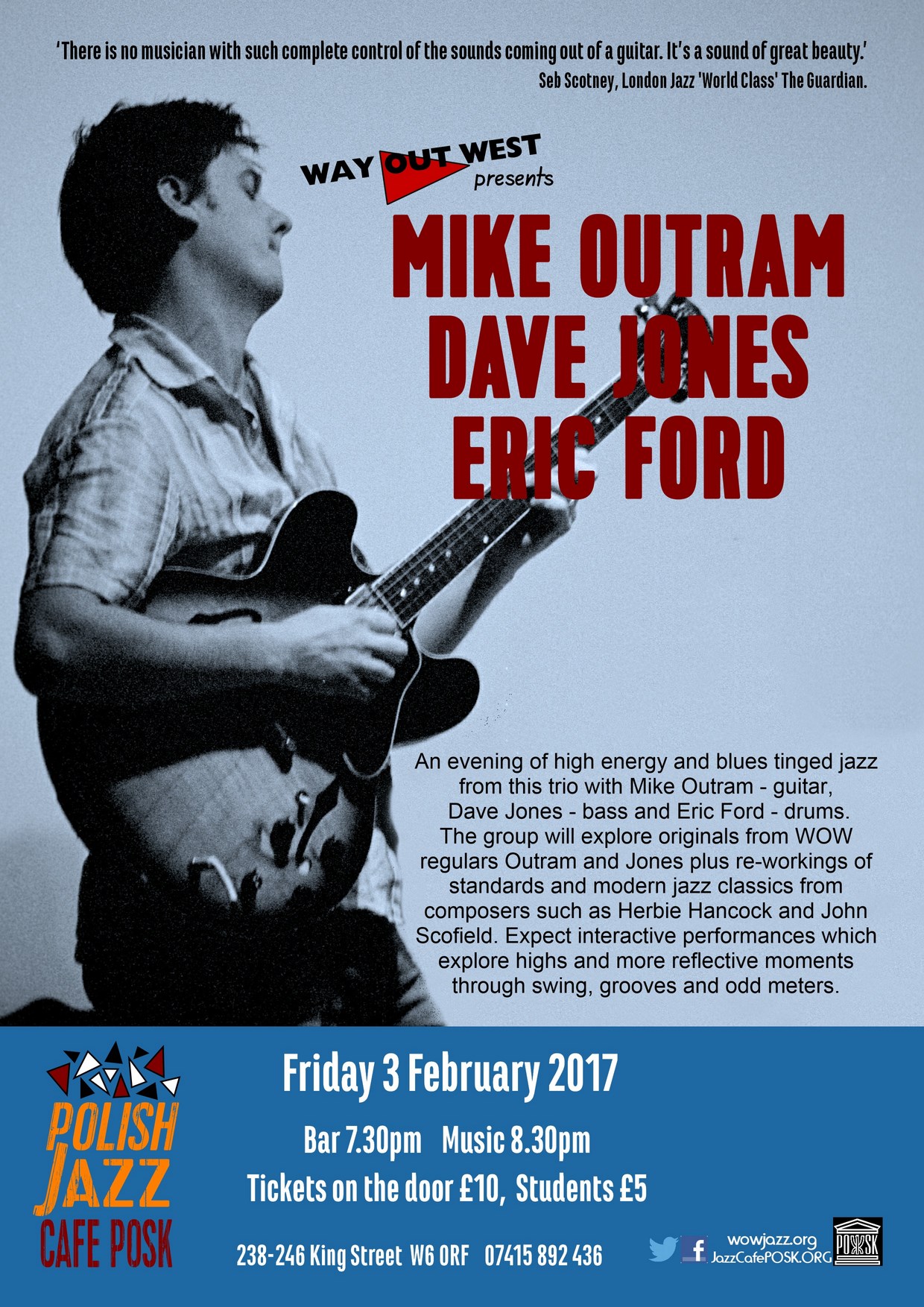 An evening of high energy and blues tinged jazz from this trio with Mike Outram – guitar plus Dave Jones – bass and Eric Ford – drums. The group will explore originals from WOW regulars Outram and Jones plus re-workings of standards and modern jazz classics from composers such as Herbie Hancock and John Scofield. Expect interactive performances which explore highs and more reflective moments through swing, grooves and odd meters.

Mike Outram is a guitarist, improviser and composer. He has toured internationally with Herbie Mann, Carleen Anderson, Tim Garland and Theo Travis; recorded with Steven Wilson, Nikki Iles & Stan Sulzmann, and is Guitar Professor at the The Royal Academy, Guildhall & Trinity College London. Mike works regularly in many UK based ensembles such as Martin Speake Trio, Theo Travis’ Double Talk, Gareth Lockrane and Pop/Country singer-songwriter Rebecca Hollweg. ‘There is no musician with such complete control of the sounds coming out of a guitar. It’s a sound of great beauty.’  Seb Scotney, London Jazz ‘World Class’ The Guardian.

Dave’s bass playing in recent years has included Ronnie Scott’s Soul and Jazz Orchestra, Pete Cater Big Band, Maciek Pysz and recently with Stefanous Tsourelis trio. He has played alongside alongside drummers Steve Gadd and Keith Carlock and is active within jazz education as former head of  Richmond Jazz School. “ ….Dave’s writing is sophisticated and nuanced. Just when you think you know where he’s going, there is a change of texture or tempo, you do find yourself in an unexpected place and , it’s beautiful!! – London Jazz News ….’
Eric Ford is an extremely in demand drummer who is the rhythmic foundation of many up and coming contemporary jazz groups such as Partikal, Matt Chandler Organ Trio, Maciek Pysz and Stefanous Tsourelis Trio. “….Strong and Creative – Julian Joseph Radio 3 …..”, “ …exquisitely subtle drumming, superbly delicate here and throughout the album – All About Jazz ….’’