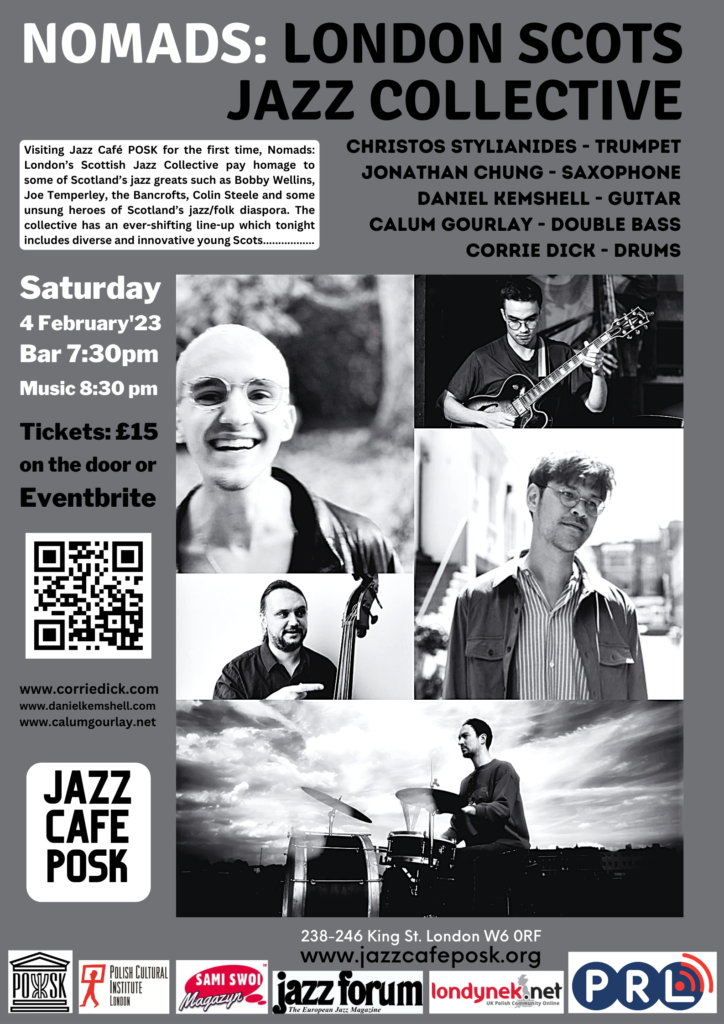 Visiting Jazz Cafe POSK for the first time, Nomads: London’s Scottish Jazz Collective pay homage to some of Scotland’s jazz greats such as Bobby Wellins, Joe Temperley, the Bancrofts, Colin Steele and some unsung heroes of Scotland’s jazz/folk diaspora. The collective has an ever-shifting line-up which tonight includes diverse and innovative young Scots.

Christos Stylianides – trumpet: Christos Stylianides (born in Cyprus and raised just outside of Glasgow) is an improvising musician, producer and composer based in London. He leads his own jazz quintet CSV, comprises 1/3 of ambient electronic trio Your Blind Passenger and plays with a multitude of other artists throughout the UK and Europe as a sideman. With a deeply personal approach and sound, his musical output focuses on original and improvised music drawing from influences across contemporary jazz, folk music, electronic/ambient music and many more.

Jonathan Chung – saxophone: Amidst a generation of highly skilled and educated musicians, saxophonist Jonathan Chung slouches, serenely brimming with fresh ideas for how to present his heartbreakingly beautiful and perfectly unique music; a lone and genuine innovator. His band Glasshopper began touring in 2014 with entrancing performances across the UK ever since. Chung is a deeply ruminative artist, a quality reflected again and again in his compositions and through his long-standing trio Glasshopper (with James Kitchman on Guitar and Corrie Dick on Drums). His saxophone sound ventures from ghostly to arrestingly warm, remaining diligent in his search for musical truths, while his writing of music and lyrics captivates peers and audiences alike weaving from moments of sonic bliss to euphoric rock-outs.

Daniel Kemshell – guitar: Daniel Kemshell was born in Aberdeen, Scotland to a Bruneian mother and English father. Focussing on the fields of improvisation, composition and contemporary music on guitar, he has been described as “a very promising soloist” (London Jazz News) and “an impressive young guitarist with a lovely tone.” (Birmingham Jazz). To date, he was worked as a collaborator in an eclectic range from Standard repertoire to electronic music and is set to release a duo EP with Olly Chalk in 2023.

Calum Gourlay - double bass: Born in Glasgow, bassist Calum Gourlay has performed with many leading jazz musicians from across the UK, and the world. Gourlay has held the acoustic bass chair with the Scottish National Jazz Orchestra, under the direction of Tommy Smith, since 2006. He has also featured prominently with Tommy Smith’s own quartet. His debut album ‘Live at The Ridgeway’ (2015) received rave reviews from the UK jazz press, not least because of its confident format – a solo, live recording in front of an intimate audience. In 2019 Calum released his first quartet album ‘New Ears’ on Ubuntu records. In 2020 the album was nominated for both a Scottish Jazz Award and an Ivor Novello Composer Award.

Corrie Dick – drums: At the rhythmic epicentre of a new era of innovative British jazz is Corrie Dick, a musician and composer specialising in euphoric, sonically-inventive drumming. He is lauded for his dynamism, his melodic slant and for his playfully subversive take on style and genre. Now an integral part of Southeast London’s evergreen arts scene, the young master of contemporary drumming has studied traditional music in Ghana and Morocco where the grooves are rich and layered, and in his homeland, Scotland, where rhythm and melody have melded for centuries.