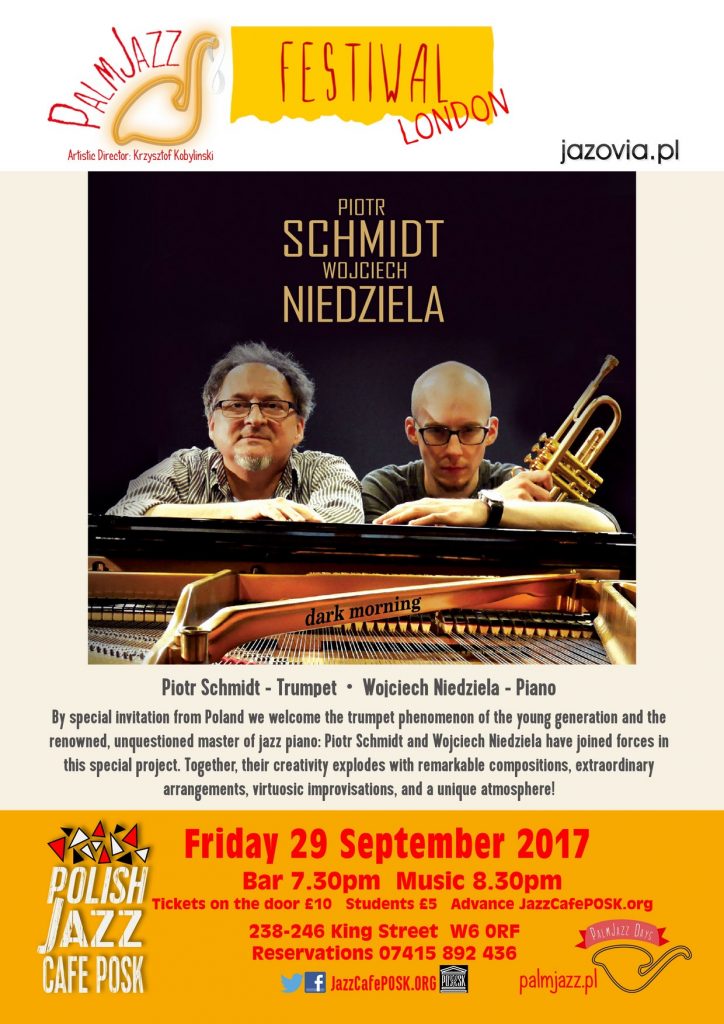 As part of our Palm Jazz Festival weekend we present the trumpet phenomenon of the young generation and the renowned, unquestioned master of jazz piano: Piotr Schmidt and Wojciech Niedziela. Together, their creativity explodes with remarkable compositions, extraordinary arrangements, virtuosic improvisations, and a unique atmosphere!

After two years of touring Poland their music and compositions have crystallised into a sublime synergy of art, the intimate immediacy which is radiant with unheard of depth and richness. The two artists have crowned their collaboration by meeting earlier this year in Gliwice’s Jazovia studio and have recorded a CD for SJ Records of 12 fantastic pieces, a selection of which they will be playing at tonight’s concert. 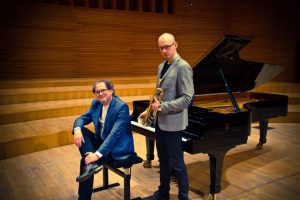 Grand Prix in the 2010 Novum Jazz Festival in Łomża, Poland

Award of the President of Gliwice for achievements in the field of artistic creation, dissemination and protection of culture (2012)

Occasional Award of the Minister of Culture and National Heritage (2013)

Piotr Schmidt has fronted nine studio albums, including three with Piotr Schmidt Electric Group (Schmidt Electric) and the latest collaboration with Wojciech Niedziela. For the past five years he has been in the top four of "the best jazz trumpeter of the year" in Jazz Forum’s Jazz Top poll; voted third in 2012 and 2015.

Piotr Schmidt also runs SJRecords which in its six years has published 24 albums highly regarded by the cognoscenti; jazz critics and fans alike.

For many years Wojciech led New Presentation, with Lora Szafran (vocals) and Piotr Wojtasik (trumpet) as soloists. He has recorded 35 albums, among others with Jan Ptaszyn Wróblewski, Piotr Baron, Henryk Miśkiewicz, Michał Kulenty, Piotr Wojtasik, Zbigniew Namysłowski, Krzysztof Popek, Jacek Niedziela, Maciej Sikała, and others. He has authored four albums: New Presentation - Trio, Lonesome Dancer, To Kiss the Ivories, and Domingos Tunes. A member of Jan Ptaszyn Wróblewski’s quartet and sextet since mid-nineties. Received nominations for the Fryderyk award for his To Kiss the Ivories, and for Jan Ptaszyn Wróblewski’s Real Jazz. Wojciech has played across Europe (including some famous jazz clubs: New Morning in Paris, Montmartre in Copenhagen, A-Trane in Berlin), in Cuba, and in the US - including in New York’s Birdland.

Professor Niedziela is also a prolific educator, teaching at the Jazz Institute of Katowice Academy of Music and the University of Applied Sciences in Nysa; he has also been a guest lecturer at the University of Louisville, Kentucky, and University of Cincinnati, Ohio, in the United States.