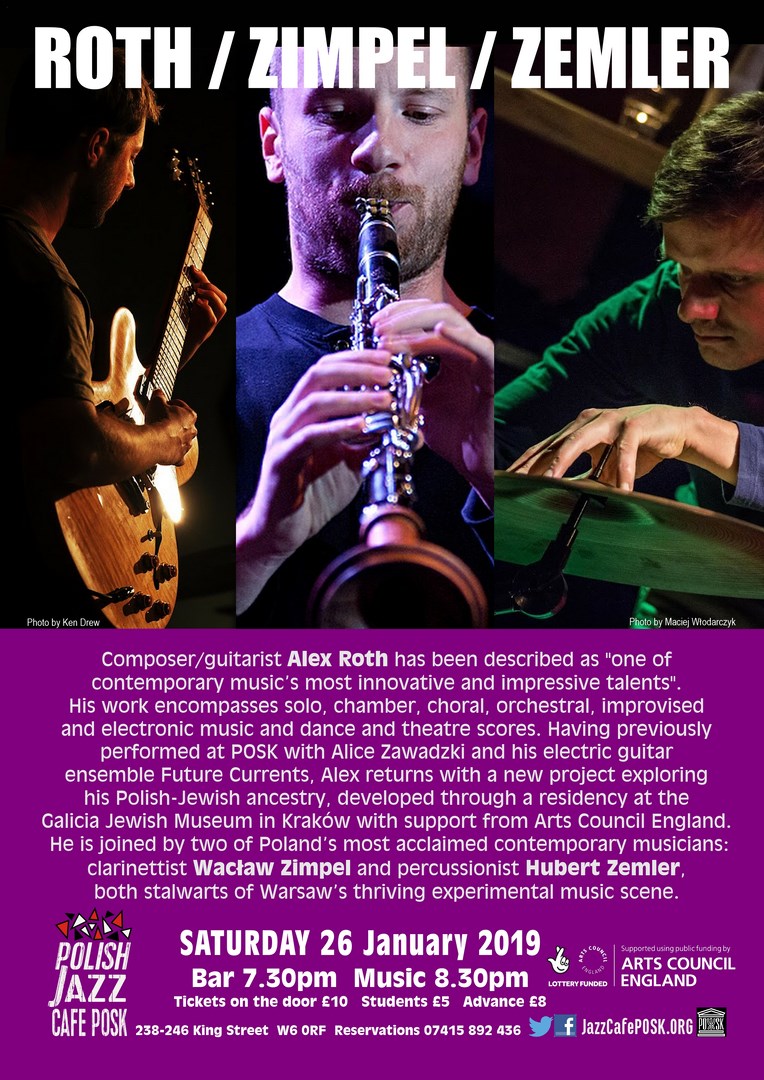 Composer/guitarist Alex Roth has been described as “one of contemporary music’s most innovative and impressive talents”. His work encompasses solo, chamber, choral, orchestral, improvised and electronic music, dance and theatre scores and sound installations, alongside touring and recording with numerous bands. Having previously performed at POSK with Alice Zawadzki and his electric guitar ensemble Future Currents, Alex returns with a new project exploring his Polish-Jewish ancestry, developed through a residency at the Galicia Jewish Museum in Kraków with support from Arts Council England. He is joined by two of Poland’s most acclaimed contemporary musicians: clarinettist Wacław Zimpel and percussionist Hubert Zemler, both stalwarts of Warsaw’s thriving experimental music scene.

Clarinetist, multi-instrumentalist, composer and producer Wacław Zimpel is one of the most original and unique talents to have emerged from Poland this millennium. Inspired as much by jazz as by electronics, minimalism and roots music from across the world, his solo releases and myriad collaborations don’t so much blur boundaries as eradicate them altogether.

Hubert Zemler is a percussionist, composer and improviser involved in countless projects across classical, experimental, improv and pop music. These include collaborations with Piotr Kurek (as Piętnastka), Wacław Zimpel (LAM, To Tu Orchestra), Kamil Szuszkiewicz and Mitch & Mitch alongside solo interpretations of renowned contemporary composers such as Per Nørgård and Steve Reich.