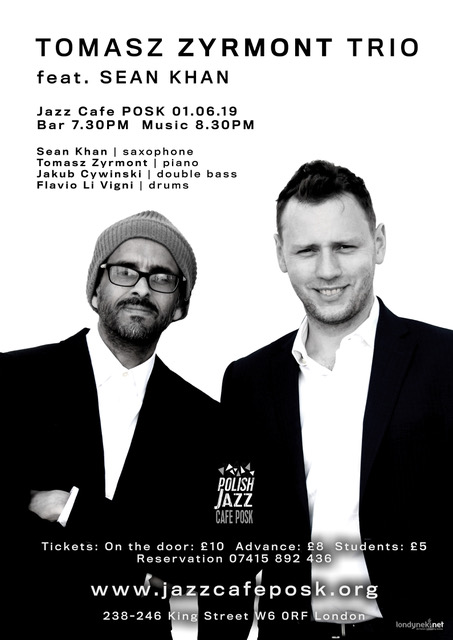 At this Jazz Café POSK concert, Tomasz and his trio have invited visionary London based saxophonist and multi-instrumentalist Sean Khan.  This promises to be an exceptional evening serving up a combination of classic- style jazz and original modern- style compositions.

Tomasz Zyrmont is a pianist and composer based in London. He has performed concerts at a wide variety of venues in United Kingdom, Poland, Germany, France, Belgium and USA. In London, he made his name participating at the London Jazz Festival, Jazz FM shows, Wigmore Lates, also performing at the British Parliament, Ronnie Scott’s and Boisdale Canary Wharf. Tomasz was honored to play a Silent Piano concert for the Yamaha company and also a piano set before Hiromi’s exclusive concert. He is a bandleader of the Groove Razors fusion band. His music has been broadcast on many radio stations including Jazz FM, Polish Radio London, Belgrade 202, Resonance FM and Near FM Dublin.

Sean Khan.  It was in the early 2000s that Sean Khan first started to infiltrate London’s jazz scene recording, what can arguably be considered as the world’s first broken beat album, When Will We Belong as the SK Radicals. A lone-wolf jazzer in and amongst a plethora of producers and djs, that hugely significant record placed Sean as one of the scene’s key pioneers.

Signing to Far Out in 2011 saw in a new era for Sean, as he was provided
a platform to fully explore the wide jazz spectrum that guides his versatile sound. His debut solo album Slow Burner received critical acclaim from the likes of John Armstrong (BBC), Jack Massarik (Evening Standard), Mike Chadwick (Jazz FM) and Jon Lusk (BBC), and his 2015 follow up Muriel, a tribute to his late mother Muriel McGinley, featured collaborations with the world renowned vocal talents of Omar, Heidi Vogel and Sabrina Malheiros. Described simply by Jazzwise Magazine as “Stunning”, the acclaim and success of this album led to Sean and his band play to sell out crowds at Ronnie Scott’s and The Jazz Cafe. Sean has also shared a stage with Nicola Conte, Nina Miranda, Marcos Valle, Sun-Ra and Pharoah Sanders collaborator Clifford Jarvis, Bheki Mseleku, Joe Armon-Jones, Binker Golding, Lisa Stansfield, and even the Beastie Boys.

In the summer of 2016, Sean ventured to Rio de Janeiro with Far Out founder and executive producer Joe Davis to record Palmares Fantasy, a collaboration with the iconic Brazilian polymath Hermeto Pascoal and his most ambitious project to date. The album takes its title from an escaped slave settlement ‘Palmares’ in the Northeast of Brazil during the 1600s. Palmares Fantasy is Khan’s utopian jazz message for the world, and features Azymuth drummer Ivan 'Mamão' Conti, bassist Paulo Russo, guitarist Jim Mullen, and guest vocals from Brazilian chanteuse Sabrina Malheiros, and Cinematic Orchestra frontwoman Heidi Vogel. 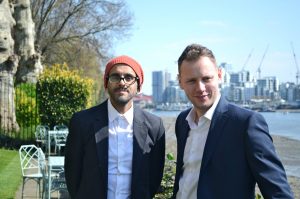